It Started with a Kiss: Episode 1 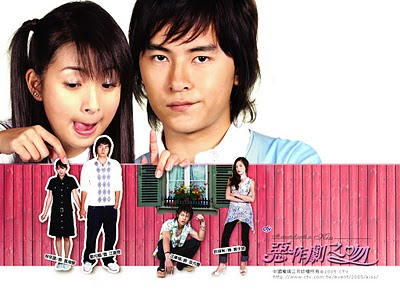 Alright, I’m ready to do my first recap! It Started with a Kiss is a Taiwanese drama that is based off of the manga by the same name. It aired in 2005-2006. I have seen three of the adaptions and this one is my favorite. I love the story which is why I could watch three of basically the same show. Even though I have watched this series before I am going to write my recap as though I haven’t seen it before. I am going to try to get out two recaps a week, maybe more if I can find the time.


We start out with Yuan Xiang Qin (Ariel Lin) standing on a walkway that connects two buildings holding a letter and giving herself an inner pep talk. The letter has heart stickers all over it. In the distance, Jiang Zhi Shu (Joe Cheng) is walking towards her. She holds out the letter and he passes by like she isn’t even there. Snob much or are you just blind?
Xiang Qin stands there with her arms extended out for a moment and then she falls backwards. Zhi Shu’s friend jumps over her and asks him some questions about airplanes and aerodynamics as Zhi Shu stares at her. He walks over, kneels down and asks “Do you have nothing better to do with your life?” Then gets up and walks away. All this time Xiang Qin has been holding the letter out and she drops her hands and the letter, as a bunch of kids circle around her. Cue intro. 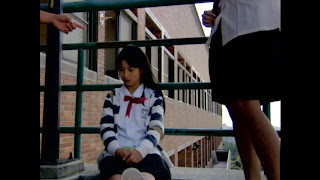 Xiang Qin sits against a railing as other students point and talk about is stupid for trying to give Zhi Shu a love letter. They steal the letter from her. She chased them around to get it back. After she gets the letter back, she hears everyone talking about how wonderful Zhi Shu is. He’s so smart, tall, and good looking. As Xiang Qin runs away she runs in to a plastic sign. She keeps trying over and over to break though. Finally one of the teachers holds it up for her to pass under. Wow… ok so I guess that we are supposed to see how stupid she is. Xiang Qin runs to the ladies room to hide. Standing just outside the doors looking pitiful, Xiang Qin sees a sign with Zhi Shu’s picture on it. She takes off again. No worries girl, we all have those bad days and wish we could change something we did that in hind sight turned out to be super embarrassing.


Next we find Xiang Qin sleeping in a gym as her friends, Chun Mei (Petty Yang) & Ya Nong (Candice Liu) look for her. At first she runs to hide in a corner but then decides to tell them she is right here. They ask her why she would embarrass herself by giving Zhi Shu a love letter. Xiang Qin cries that she has had a crush on Zhi Shu for two years and finally got the courage to tell him. Her friends pity her and she walks away to grab her bag. Xiang Qin says she even looked up a bunch of words while she was writing the letter and he didn’t even look at it. Her friends tell Xiang Qin they need to get to class. Chan Mei says she has never seen him with a girl. Ya Nong replies with maybe he is gay. That would hilarious, but this is not that kind of drama.
A-Jin (Jiro Wang) shows up and complains at Xiang Qin about liking that guy when he is in love with her. A-in says that he will fight Zhi Shu for her. His friends don’t want to help. A-Jin tells them to act like men. Xiang Qin tells A-Jin that is enough. She tries to encourage herself again by saying that Zhi Shu is just a jerk. Her friends tell her to look for someone else to like. The camera shows A-Jin and his friends smiling and waving at her.

Xiang Qin sits in class thinking about the letter, saying that a genius wouldn’t like a dumb girl like her, but she can’t help herself. She fell for him at first sight. Flashback: to the first day of high school when Zhi Shu gives a speech. Xiang Qin is super impressed with him and thinks he is so good looking too. She wants to be friends and in the same class. Getting excited Xiang Qin says that she will go from F to A class by next year! Chan Mei and Ya Nong tell her that is impossible. Xiang Qin says then by the last year of school she will make it into Class A. But that was just wishful thinking; and we see why. Class A’s teacher gives a math lecture. Class F’s teacher draws pictures for his class as they learn adages. Xiang Qin has her head down and is not paying attention. Zhi Shu stands up and corrects the teacher on the math problem (Ack, Math).

After school ends for the day, Chan Mei and Ya Nong ask about Xiang Qin’s new house and A-Jin wants to come over too. Xiang Qin complains about her dad making the furniture. It’s made from driftwood and very manly looking. Xiang Qin wants lace and pretty things. A-Jin says he will make her the house of her dreams.  She sees Zhi Shu and tries to hide. A-Jin goes over and tries to pick a fight with Zhi Shu. A-Jin’s and Zhi Shu’s friends hold A-Jin back as Zhi Shu says he hates stupid people.

While Xiang Qin is unpacking her room her mind wanders and she drops and breaks a picture frame. Papa Yuan (Tang Tsung Sheng) comes in and asks her what is wrong. Xiang Qin put a box in the wrong room when it was hers. Papa Yuan tells her to be careful picking up the broken glass.

Papa Yuan is downstairs building a stool. He starts talking to a picture of Xiang Qin’s mom. He gets all emotional as he tells her that he fulfilled the dream they had of owning a house. Xiang Qin finds him crying when she brings a box down to him. He tries to hide his tears and pulls himself together explaining he was just showing mom the house. She gives in a tissue for his nose. He is very proud of their new home saying they should smell all the new smells. She thinks it is shaky in the wind. He says it is a sturdy home. We know what that means…

They hear the door bell and Xiang Qin finds that Chan Mei, Ya Nong, and A-JIN are here to visit. They brought house warming gifts. A-Jin calls Papa Yuan “Dad” saying that Xiang Qin and he is a couple. Xiang Qin shanks her head no behind him to her dad.  A-JIN tries to help move stuff and accidently breaks the stool. Chan Mei and Ya Nong want to see Xiang Qin’s bedroom. The girls pretend to be high ladies having afternoon tea. A-Jin and Papa Yuan talk about the stool wiggling when… dun dun dun, an earthquake hits.

The girls run down stairs as things fall off the walls. They pull everyone out of the house. Just as they get outside, the house falls down, completely demolished. All the other houses around theirs have no damage. They stare at the rubble in shock. They freak out when they realize mom’s photos are still in the house. Since their house was the only one to have this kind of damage of course they are on the news; All over the news... everywhere.

Xiang Qin and friends disguise themselves like they are celebrities hiding after a scandal. They come upon A-Jin and crew trying to raise money for Xiang Qin. Xiang Qin tries to hide in the crowd when A-Jin sees her. He points her out and pulls Xiang Qin up front to use her to help with raising the money.  One of the boys bullies money out of a couple of kids. Xiang Qin tries to give the money back and Zhi Shu walks by. A-Jin tries to get money from Zhi Shu since his family is rich.  Zhi Shu finally gives some money but Xiang Qin says that she doesn’t want help from him, EVER. He is such a jerk; she doesn’t want anything from him. Zhi Shu walks away smirking; I bet he can’t wait for Xiang Qin’s reaction when she finds out where she is going to be staying.

Zhi Shu comes out and introduces himself. He is so tall next to the rest of them. Xiang Qin turns around when she hears his name and tries to hide as her eye get huge. You can just tell that she wants to crawl into a hole and never come out. Zhi Shu smirks at Xiang Qin as he helps get stuff down. Mama Jiang is running around with a cake and tells Xiang Qin to have a piece right now. Mama Jiang asks if the two kids have met since they go to the same school. Zhi Shu says “Our classrooms are quite far apart but we’re quite well-acquainted recently. Isn’t that right, Miss Yuan?” Mom is super excited about having another girl in the house. A younger boy gets right in Xiang Qin’s face. 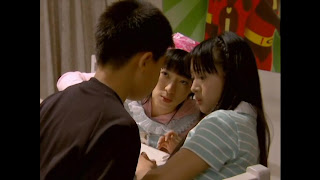 This show… I just love it. The shenanigans of these two teens living together, I can’t wait. If you read my last drama challenge, you would know that Forced Cohabitation is one of my favorite drama tropes; As well as complete opposites. I think that both Xiang Qin and Zhi Shu are about to have their worlds turned upside down. First off, Xiang Qin is an only child, so she has never experienced living with other children. It probably won’t be too big of a deal just because they are not her siblings but it will be a change none the less. Also, having a mother figure in her life now; someone to teach her things that a woman should know in her culture. Mama Jiang seems as though she is going to become a person that Xiang Qin can be excited about things together with. Just as an educated guess, but I think that Mama Jiang was a fan girl in her day. Once a fan girl, always a fan girl. Then there is Zhi Shu; I think that will either be a lot more smirking or that smirk will be wiped off his face (Or maybe a little of both). I do know that Xiang Qin living with him is going to bring out personality traits that he didn’t know that he had. When you begin living with another person, you find out new things about yourself. I’m sure that his patience is going to be tried and push to the limit with Xiang Qin. 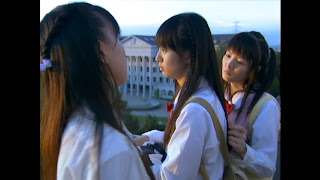 Then there is A-Jin. Oh A-Jin, it sucks to be the second lead. He loves Xiang Qin as much as a silly teenage boy can. He is completely blinded by that love too. Xiang Qin isn’t even remotely interested in him in any other way other than as a friend. Over all I feel like this was a good first episode. The only thing that I might have changed was the end of the episode. I would have ended with Zhi Shu’s smirk while helping Xiang Qin unload the truck. I can’t wait for the high jinx to follow.
Posted by Dramadraftee at 8:43 PM

Email ThisBlogThis!Share to TwitterShare to FacebookShare to Pinterest
Labels: Arial Lin, It Started with a Kiss, Jiro Wang, Joe Cheng